I cannot recall a time when this shoe box wasn’t in the top drawer of my mother’s dresser. The box stayed in the drawer, even as my mother downsized several times over the years, and it was used for keeping various small items together, usually Christmas themed jewelry. It went into a different dresser when Mom went to skilled care and she could no longer keep large pieces of her own furniture, and it continued to hold Christmas jewelry. 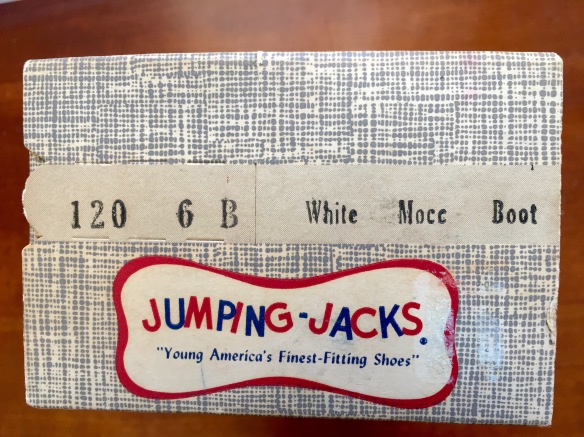 I know the box held a pair of my shoes, and judging by the size, it was probably one of my first pairs. I have no idea what happened to the shoes. People have asked if those shoes were bronzed, a something commonly done with a baby’s first pair of shoes back in the day, but they weren’t.

Someone asked me if my mom kept the box for sentimental reasons, but I don’t think so either. I think Mom would have told me if she had. The reason for keeping the box was probably that it was the right size to hold certain trinkets that were not highly valuable.

My parents came of age during The Great Depression. My father was old enough to remember the huge stock market crash and have a basic (very basic as he was not yet a teenager) understanding of the implications early on. Both parents were careful with money, my mother especially, so she was not the type to splurge on little containers to hold her stuff- especially stuff that was kept in a drawer. One thing I’ve observed about my parents and many other people of their generation is that they kept their things for years (and took care of them), without doing major purges. Yet, very few of these people, at least the ones I knew, could be considered pack rats or hoarders.

I can’t say I completely inherited those habits. I’m fairly careful with money- that will be evident in my next post about the scrapbooks. When I was a child, my parents often referred to me as a pack rat, as I kept things and wasn’t good about keeping them organized. I still have and keep too much stuff, though not nearly enough to be the subject of one of those reality shows that deals with hoarding (although I have a son who may potentially be a great candidate). Periodically, we do major purges around here, and they are painful, but necessary.

I emptied the shoe box, thinking it was time for it to go. After all, I do hang onto too many things. But, after taking pictures and writing this post, I don’t think I’m quite ready yet.